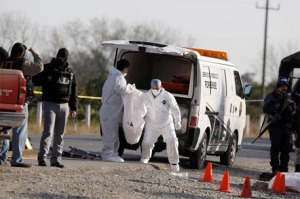 Mexico’s information commissioners have ordered the federal prosecutor’s office to release files on police officials detained in connection to the discovery of hundreds of bodies in mass graves in April 2011.

This week, Mexico’s new information commissioners for the first time ordered the federal prosecutor’s office to open certain investigative files relating to the discovery of some 200 bodies in mass graves in the state of Tamaulipas in April 2011. The victims, many of them migrants headed toward the U.S-Mexico border, were pulled from intercity buses and executed by the Zetas criminal organization with the alleged complicity of local police and government officials.

The decision by the Federal Institute for Access to Information (IFAI) comes in response to an access to information request and appeal filed by the National Security Archive’s Jesse Franzblau for information on 16 Mexican police officials detained in the wake of the discovery, usually referred to as the 2011 San Fernando massacre. (See related posting, “Mexico’s San Fernando Massacre: A Declassified History,” at the National Security Archive.)

The announcement came during the four-year anniversary of the related 2010 San Fernando massacre and on the same day that MVS Noticias reported on our efforts to force another Mexican agency, the National Migration Institute (INM), to declassify and release documents on that case.

In making the new decision, the IFAI commissioners—a seven-member body approved by the Mexican Senate—declared themselves competent to determine the applicability of human rights criteria in access to information cases, even the absence of such a finding by another legal authority. The finding is critically important for transparency in such cases. Article 14 of Mexico’s access law prohibits the state from withholding information relating to grave violations of human rights and humanitarian law.

IFAI’s decision this week also ratifies legal concepts set forth in related access to information cases now being challenged in Mexican courts by Article 19 and the Fundacion para la Justicia (FJEDD). Those groups are seeking the declassification of preliminary investigative files (averiguación previa) in three separate migrant killings, including the 2010 and 2011 San Fernando cases.

In those cases, two separate federal judges have ruled that IFAI is competent and legally obligated to make determinations with respect to the applicability of human rights criteria in access to information cases. One judge took it a step further, ruling that the 2010 and 2011 San Fernando killings, as well as the murder and dismemberment of 49 others in 2012, were human rights violations prima facie and that IFAI should require the federal prosecutor’s office (Procuraduría General de la República – PGR) to release files on the cases. After appeals from IFAI and the PGR, those cases are now up for consideration by Mexico’s Supreme Court.

Here’s a link to the official transcript of IFAI’s public session earlier this week. Commissioner Areli Cano Guadiana begins the discussion of the San Fernando case on page 65.

Declassified documents previously published by the National Security Archive underscore allegations linking federal and state officials to the San Fernando massacre. One U.S. Embassy cable highlights the arrest of 16 police officials in connection to the 2011 San Fernando massacre and the fact that state officials were “trying to downplay both the San Fernando discoveries [of mass graves] and the states [sic] responsibility for them.” Embassy officials said they did so despite being “fully cognizant of the hazards of highway travel in this area.” Another U.S. report described a state of “near total impunity” for criminal organizations operating in that region “in the face of compromised local security forces.” (See previous post on U.S. documents on San Fernando massacre).

While a number of people have been arrested in relation to the San Fernando cases, there has been little information available on the cases against them. The presumed authors of the violence, Édgar Huerta Montiel (“El Wache”) and Martín Omar Estrada Luna (“El Kilo”) remain in detention. Miguel Ángel Treviño Morales, the top leader of the Zetas, was arrested by Mexican authorities in July 2013. More recently, Mexican authorities reported the arrest of an alleged human smuggler (pollero) said to be linked to the case.