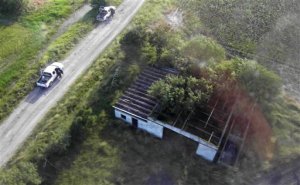 Aerial view of the ranch in Tamaulipas, Mexico, where the bodies of 72 murdered migrants were discovered in August 2010.

Nearly four years later, Mexico’s federal migration agency has for the first time released declassified files on the August 2010 San Fernando massacre—in which 72 migrants were pulled from buses in Mexico’s northern border state of Tamaulipas and executed by suspected members of the Los Zetas criminal group.

In doing so, the National Migration Institute (Instituto Nacional de Migración – INM) also becomes the first Mexican agency to acknowledge the possibility that the infamous massacre, which has garnered international attention, constituted a grave violation of human rights or humanitarian law, something other Mexican agencies, including the National Commission on Human Rights (CNDH), have refused to do.

The documents were released in response to an access to information request and appeal filed by the National Security Archive as part of a right to truth campaign aimed at unearthing classified files about migrant abuses in Mexico. This exciting new development is the subject of a story published today on Aristegui Noticias in Mexico and a radio interview on Noticias MVS with Migration Declassified editor Michael Evans.

INM’s decision to disclose the records is an indication that it intends to respect recent judicial rulings finding that agencies are capable of evaluating for themselves whether the Mexican access law’s human rights “override” applies to information that would otherwise be held in secret as part of a preliminary investigation (averiguación previa). In the most far-reaching of these decisions, the 8th Judge of the Federal District, Fernando Silva García, ruled that the exception guaranteeing access to human rights information does apply in the San Fernando case and ordered Mexico’s Public Prosecutor’s Office (Procuraduría General de la Republica – PGR) to release its preliminary investigative files.

In doing so, Judge Silva determined that the migrant killings were gross human rights violations, prima facie, and found that the country’s information oversight body—the Federal Institute for Access to Information (Instituto Federal de Acceso a la Información y Protección de Datos – IFAI)—had violated citizen’s rights by upholding the PGR’s decision to deny access to the records. Silva said transparency in such cases is key to “avoiding impunity and the repetition of such acts in the future.” In the judge’s view, the sensitive nature of the investigatory files is precisely why it is so important to make them public, since human rights violations, by definition, “affect society as a whole.”

The Fundación para la Justicia (FJEDD), a pro-transparency group in Mexico, filed the information request for the records, and later took the case to court. A similar ruling was handed down in a case brought by Article 19 earlier this year (see Article 19 press release). Both cases are now under appeal.

The documents recently released by INM in this latest case were cited in a ruling on the San Fernando case issued by CNDH in December 2013 and requested by the National Security Archive in April 2014. INM initially denied the request, arguing that the documents were properly classified (reservado) because they contained sensitive information that could put individuals at risk. We appealed the decision, citing Judge Silva’s ruling in the FJEDD case, and arguing that such records should be made available in accordance with the human rights exception articulated in the final paragraph of Article 14 of Mexico’s transparency law. In response to our appeal, INM released public versions of the requested documents, citing the human rights clause and implicitly acknowledging the possibility that those files may contain evidence about grave violations of human rights.

The newly-released files include internal reports produced by the migration agency in the wake of the 2010 massacre, including one of the first reports produced by INM officials following the discovery of the 72 bodies. The August 27 redacted document includes information on the events that occurred in the previous days and discusses how the man then thought to be the lone survivor of the massacre was placed in the custody of Mexican naval authorities. U.S. declassified documents, obtained through freedom of information requests filed by Migration Declassified, also reveal details on the San Fernando massacre, and the individual mentioned in the INM files. One cable, sent from the U.S. Consulate in Tamaulipas, provides details of the massacre as related by the survivor, who told Mexican authorities that before the killings some of the victims were offered an opportunity to work for the Zetas as assassins (sicarios). After all but one member of the group turned down the offer to work for the Zetas, the survivor stated that 54 men and 15 women were subsequently executed.

Even more than the content of the documents themselves, INM’s decision to declassify the files at all is a huge step forward in terms of how the federal government handles the declassification of information related to violations of human rights and the rights of migrants. David Mora from FJEDD praised INM’s decision to produce documents on the San Fernando case, adding that he thought it paradoxical that CNDH, the government’s human rights ombudsman, had refused to divulge those same records in response to similar requests.

Ana Cristina Ruelas of Article 19 told us that INM’s decision to apply the human rights exception and rule in favor of disclosure should serve is a model for other agencies in processing requests for information related to human rights investigations. The legal reasoning behind the decision goes well beyond anything that the agency charged with protecting the right to information, IFAI, has done to advance access to human rights information. A newly-selected panel of IFAI commissioners with newly-granted constitutional authorities would do well to study both Judge Silva’s decision and INM’s apparent application of it as it moves forward.

My Tweets
Join 434 other followers