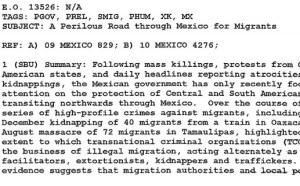 The U.S. Embassy cited information indicating that “migration authorities and local police” in Mexico “often turn a blind eye or collude in” the kidnappings and massacres carried out by the drug cartels.

On April 1, 2011, Mexican authorities discovered the first of several mass graves in Tamaulipas state that all told would contain the bodies of nearly 200 people. The victims, many of them migrants headed toward the U.S-Mexico border, were pulled from intercity buses and executed by the Zetas criminal organization with the alleged complicity of local police and government officials.

Now three years later, not a single individual has been sentenced in the case.

The results of numerous Freedom of Information Act requests filed on the case are detailed in previous postings on this blog as well as in a comprehensive Electronic Briefing Book published on the main website of the National Security Archive. Many of these records were also highlighted in Proceso magazine by award-winning journalist Marcela Turati.

To mark the third anniversary of this gruesome discovery, we’re here highlighting some of the most important declassified documents from those collections. Some of these are among the evidence being presented in a pair of legal actions aimed at forcing the Mexican government to provide more information about the case and to explain why the perpetrators and facilitators have not been brought to justice.